Just as a retail store assistant observes physical body language in-store and determines the next best step with the shopper, Modern Marketers can do the same thing while observing Digital Body Language. The big difference is that Modern Marketers can observe thousands of people at the same time and guide their experience based on predetermined actions.

What can you observe?

There are a range of behaviours you can observe across your digital platforms. It could be email engagement or website behaviour.

Just as you can observe positive engagement you can also observe and act on the lack of engagement, or a mix of the two.

You’re now in the process of a conversation, that means you need to plan your campaign differently.

The dictionary defines a “conversation” as “A talk, especially an informal one, between two or more people, in which news and ideas are exchanged.”

If a conversation is your goal, simply pushing emails out the door is probably not the best strategy. When you design your campaign, you need to design for marketing automation.

If engagement is the goal, how do you define engagement?

This is a really important question. For years, marketers have focused on rudimentary aspects of email campaigns, measuring success against metrics like:

While the last three of the points listed above, possible forwards, open rates and click-through rates indicate engagement, the first two are really just vanity metrics. Total emails sent is of little value except in the context of the campaign as a whole and total email opens can be deceptive.

If engagement is your goal, you want to start focussing on unique values that indicate engagement.

Try this as an approach.

If you have a single benchmark across all campaigns to measure engagement, that’s possibly your first mistake. Various campaigns will be sent to different audiences and they will engage differently.

Using industry benchmarks can offer some insight, however, the way your audience engages with your content will be unique to your organisation.

Gather your own stats, build your own benchmarks and measure them against your various audiences.

Mixing all of these people together and producing a single benchmark is a flawed approach.

As I meet with Eloqua customers, I find that they often don’t warm to the idea of segmenting their database better in order to generally produce smaller audiences. That main issue being “smaller” audiences. When marketers are measured on the total number of emails sent, smaller audiences can be an alarm bell.

Analysis of a real campaign

The Campaign Analysis by Campaign Eloqua Insight report shown here is a live campaign at the time this blog post was written. It’s the fourth and final webinar in a series of webinars.

The audience size is small – initially 358 people. However, you can see we have 68 people registered to attend. The primary audience for this webinar is non-Eloqua customers, however, the content is relevant for Eloqua customers too.

The segmentation on this campaign is very specific. It includes people who registered and/or attended one of the first three webinars.

Insight as you need it 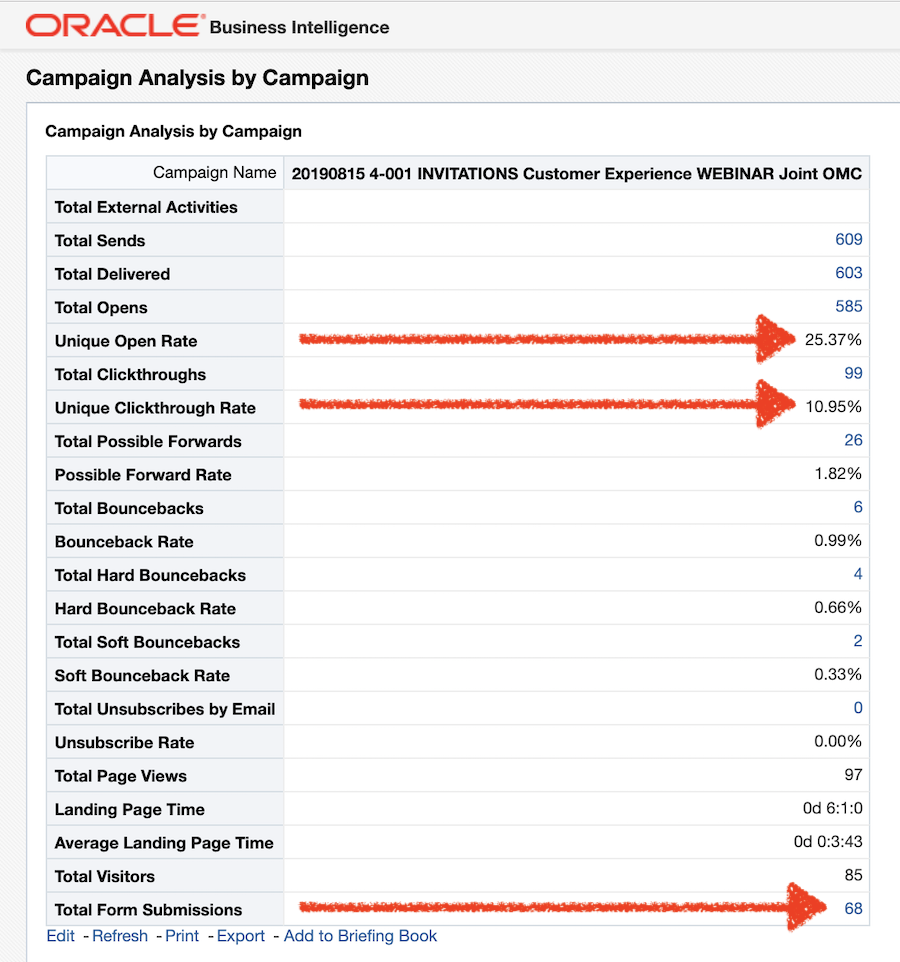 This Campaign report is accessible directly from the Eloqua Campaign Canvas. It’s just one of 200+ pre-built reports helping marketers uncover the insight they need to optimise campaigns.

Finally, the clear reason why your own benchmarks are more powerful than measuring yourself against others you think are like you.

At Marketing Cube we have a range of subscriptions or Email Groups. Each subscription provides different content to various audiences. The audience size associated to these subscriptions various significantly. The College audience is specifically for customers following live end-user training workshops. These groups vary from 5 – 24 people at a time.

The Eloqua User Group subscription is a regular monthly webinar to people who have specifically subscribed and regularly includes 600+ people.

A single benchmark across your segments is not the right answer.

You can clearly see that taking a single benchmark across these audiences will not serve you well. Each audience engages for a different reason and in a different manner. Make the time to understand benchmarks for your various audiences and optimise to suit.

Have fun, let us know if you have any questions.

From the implementation of Oracle Marketing Cloud to CRM integration & more, our team has supported global & local brands since 2007.

Having the right tool is the first step, executing your campaigns with the maximum outcome is where our team can help you.

Our team of Customer Success Coaches support you in every aspect of Marketing Automation.

Derek is a Marketing Technologist. He's spent the past 20 years understanding how technology can help organisations engage prospects and customers. With the advent of SaaS technologies, he has helped organisations take advantage of this new delivery model while ensuring their customers are at the centre of all they do. As our Customer Success Director, Derek engages directly with our Eloqua customers to help them get the most out of the platform.

Eloqua, Apps & CX The value of data to Modern Marketers