Technology is helpful when it can take something complex and make it simple. The Eloqua Campaign Canvas is one of those technology solutions. The simple user interface takes the many moving parts of your digital campaign and represents it in a simple icon format.

Over the past couple of weeks I’ve spent some time with new Oracle Marking Cloud Eloqua customers walking them through their campaigns and assisting them with the design of their Campaign Canvas. There are some fundamentals, when understood, that make your life that much easier. In the post below I’ll walk you through a specific Campaign Canvas and explain each of the steps. 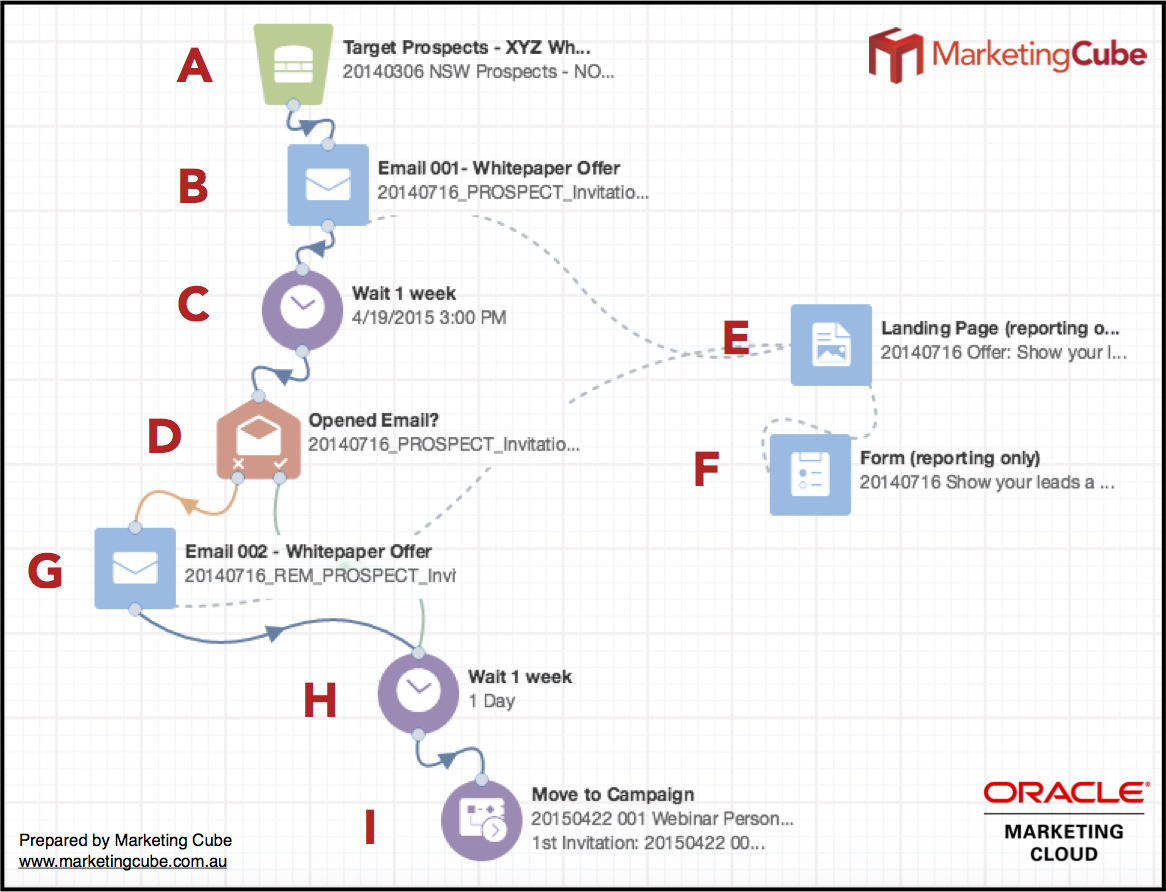 Each of the steps above i.e. A, B, C etc are explained in more detail. During this blog post, we’ll explore each of these steps in sequence.

The campaign canvas above is designed to target a group of people, a Segment, send them an invitation to access a whitepaper, drive them to a Landing Page and then have them complete a Form and then move them to a second campaign.

For those people who miss or don’t open the first invitation, we wait for a period of time and then send them a reminder. Once people have been through this campaign, we then Move them to another campaign inviting them to join a webinar.

Let’s walk through each of the steps. Throughout this post you’ll find a range of links to the Oracle Eloqua Help Centre. Go ahead a click on these to learn more about the Campaign Canvas.

The starting point for 95% of your campaigns will be a Segment. The Segment contains a target list of contacts you’ve selected to be *Campaign Members. You can have multiple Segments on the Campaign Canvas. It’s often easier to determine your target lists via Segments if you have varying types of message/emails designed for various audiences.

EXAMPLE: If you’re hosting an event, you may want to invite Customers, Prospects, Business Partners and even target specific internal staff. The way you present your message will likely differ to each of these audiences. This is a perfect example of why multiple Segments on your canvas makes sense.

*NOTE: Campaign Members is an important concept to understand about the Campaign Canvas. A single contact can only receive one stream of communications in a single Campaign and by default a Contact cannot enter a Campaign twice. This removes the chance of them receiving the same email a second time at some stage in the future. If you have one contact in two Segments on the Campaign Canvas, Eloqua will determine which email they receive through a complex series of alphabetical and numerical order. TIP: focus on getting the Segments right to avoid this outcome.

Sending your email is generally what your campaign is all about. It’s from the Campaign Canvas that you can control “who” the email comes from i.e. the name that appears against the email in a person’s inbox. To do this, you need to have created Signatures and Signature Rules – see “A” below. Using the Scheduling feature – see “B” below, you can select the times of day and days of the week your email is received. 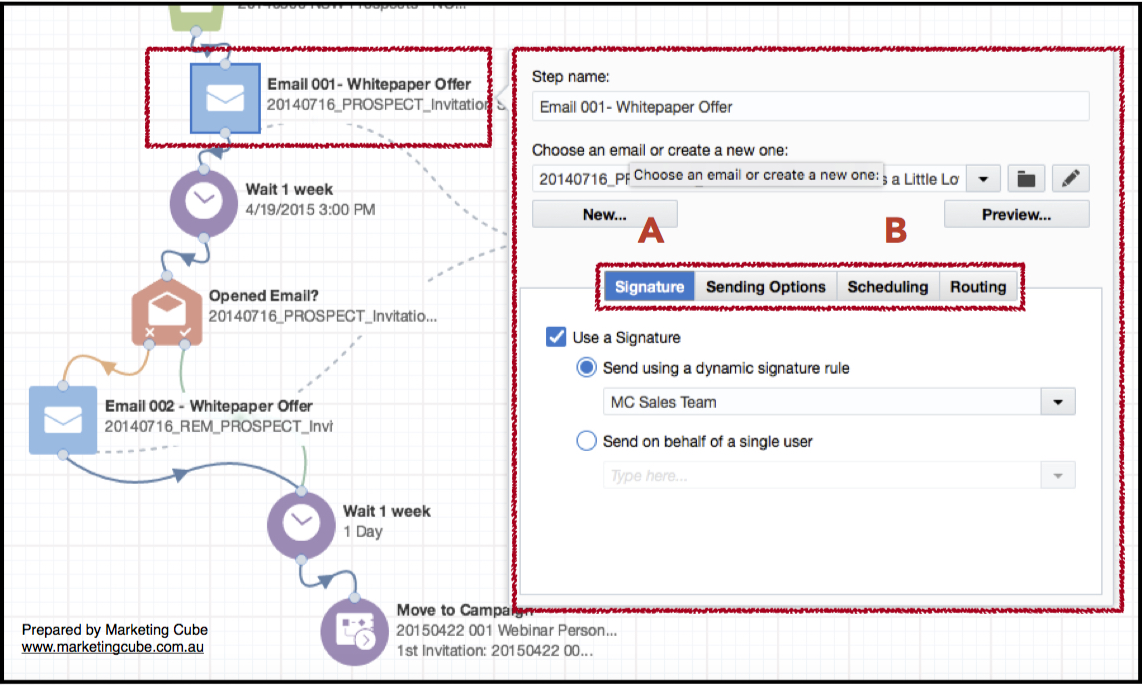 Simply double click on the Email Step to access this menu. Once your email is associated with this step, i.e. it’s changed from grey to blue, you can edit these various options. Even if your Campaign is active, you can access the Email Editor from the Canvas and edit it if needed without having to deactivate the Campaign. The Edit button, the square icon with the pencil in it – to the far right by the folder icon, is how your edit your email from the Canvas.

If you miss the Wait step and go directly to Step D – “Opened Email?”, you’re literally giving people a nano-second to receive the email and open it. That’s not going to work. As a general rule you should always include a Wait step following an email send. 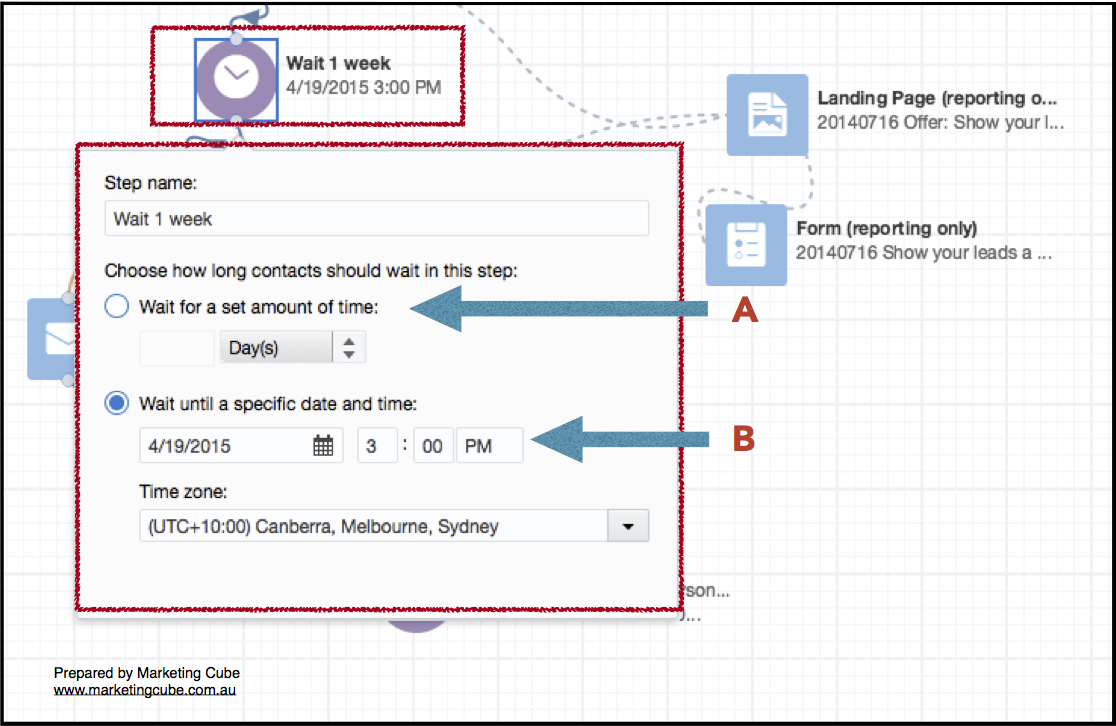 Wait steps can be executed in a couple of ways delivering different results. You can Wait for a set amount of time – Step A above or Wait until a specific date and time Step B above.

EXAMPLE: If you’re hosting an event, that event will take place on a specific date and time. This will generally mean you want to have the various communications prior to the event delivered on a specific date and time. If you’re running a nurturing campaign where the campaign may be active for 6-12 months, waiting for a set amount of time e.g. two weeks, is the option you’ll want to select.

TIP: If your campaign is active for a longer period of time and you have Campaign Members entering the campaign at regular intervals (i.e. in addition to the original Segment), you will generally want to select the Wait step for a set amount of time.

This is when you start to engage with your Segment based on their engagement or their Digital Body Language. When you select this Decision Step, you need to add the email in question to the step. This is typically the same email shown in Step B above.

TIP: There are several Decision Steps you can execute following your Wait step. e.g. Did they open the Email? Did they Click Through? Were they sent another email? You can compare Contact Fields e.g. which state are they in or which industry? But, Opened Email? is probably the most common. A Decision step gives you two possible outcomes – Yes or No.

If a person hasn’t opened your first email, they’re a good candidate to receive the email again. It’s a also a good idea to change the subject line of the email and also the day and/or time of day it’s delivered. You may also want to adjust the opening paragraph of the email acknowledging that the person “may not” have had a chance to read your first email. 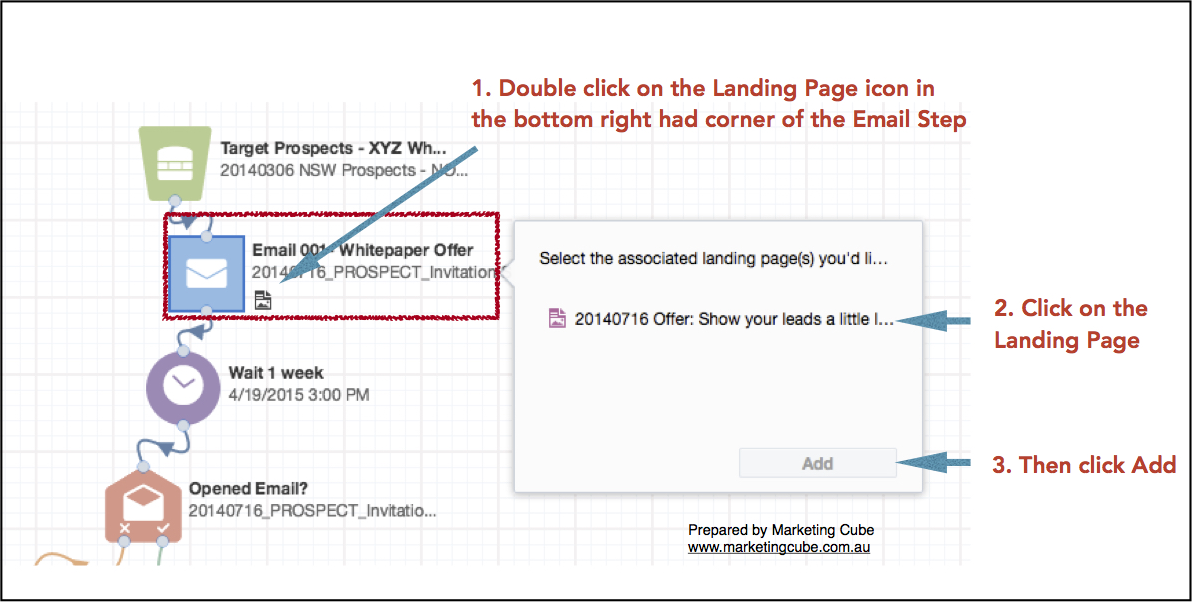 If you have the same Landing Page link in other Emails already on the Canvas, once you save the Canvas Eloqua will draw grey lines connecting all of them. These lines from the Emails to the Landing Page (reporting only) icon are visual confirmation that you have the hyperlink in your Email to that Landing Page.

This is essentially a repeat of Step B. The only thing you want to think through are a few changes to the subject line of this repeated email and to perhaps adjust the day and time of day delivery from the first email.

See Step C above, this is the same process.

Step I – Move to Campaign (optional)

Once you’ve taken the time to map out your buyer’s journey it’s likely you will want to progress your contacts to another campaign with an additional offer. You can also “Add” the contact to another campaign. This means the contact will remain in the first campaign while also being added to the next campaign. You can use Wait steps at the entry point of the next campaign to ensure your contact isn’t bombarded with emails.

Please contact us today if you have questions about Eloqua. The team at Marketing Cube provide a range of Agency Services for Eloqua customers.

The Benefits of Dynamic Link Tracking through Social Media What to do BEFORE your Modern Marketer resigns?