Having been to several Oracle events this year, I was joking confidently with my co-workers that I’d be seeing plenty of America’s Cup footage at this year’s Oracle Open World. Not that I minded, those fantastic yachts sailing in San Francisco look amazing.

The reality was that there was plenty of huge footage before keynotes, Oracle brought in the winning yacht, members from the team each day were interviewed and the America`s Cup itself was there too!

For me, this epitomised two of the three major takeaways from Oracle Open World this week.

1. Digital Transformation is now; and
2. Scale

The first, digital transformation, was the central and most talked about theme for the whole event.

On the last day, I stopped by the stand under the America’s Cup yacht and watched some of Team USA being interviewed by an Oracle Data expert.

Having won the opportunity to define what the America’s Cup Challenge would be, Larry Ellison went on to produce not only a spectacular yacht design, that transformed the race from displacement hulls to hyrdofoils for the first time, but also added technology and literally thousands of data points.

Oracle were able to monitor everything and feed real-time data back to PDAs and displays for the yacht crew. Terrabytes of data and video (adapted Go Pro technology) were used for training and to optimise the speed of the boat, as well as make any changes required during the race itself. Every wind shift and move the 2 boats made updated the sailing strategy and actions on-board. 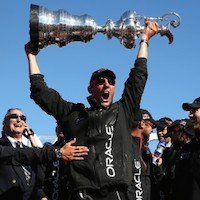 Nine races in though, the Team USA found themselves down 8 races to 1 in a first to 9 competition. What happened next was remarkable though. The crew and shore team had been looking at the data ad at every aspect of the crew since the start, making a series of changes and risky decisions. In races 8 and 9, there had been some progress. Team USA won race 10 and then went on to win the next 8, winning the Americas Cup.

The key message here though was this. This was a business analogy for digital disruption. Whether your company is like Team NZ – 7 races in the lead with only one to win, or like Team USA, 7 races down and with 8 to win, digital disruption and transformation is part of your landscape.

An interesting side note was that Oracle also made the yacht data openly available. It was picked up and used by developers to build augmented reality applications that gave new perspectives to race watchers, in a way that no-one at Oracle could even have dreamed about prior. Many technology vendors are in the same boat and are now opening up their platforms for external innovation.

The second key takeaway for me was scale.

The scale of Oracle itself, mirrored in an event with two massive exhibitor halls, hundreds of speakers, and tens of thousands of customers and other attendees from around the world.

The scale of Oracle’s commitment to the Cloud and to building technologies that support customer’s ability to leverage the Cloud to drive their businesses.

The scale of Oracle partner community supporting that change, both in services and in supporting technologies. Not just in the USA and Europe, but literally all around the world.

The third and final key takeaway from me was the massive juxtaposition between the wealth creation machine that is Oracle and its community and the many homeless people that we passed every day. There we were with more than we could eat and drink, and more giveaways than people could carry.

The lives of the less fortunate were incredibly different. As Pierre Hessler from Capgemini put it in his keynote (which we will feature in further blog posts) we are unbelievably and undeservedly lucky.

It made me think about what we as a business can do to give back, and strengthened my resolve to ensure that we appreciate our luck.