We joined 600+ people at the Oracle CloudWorld event in Melbourne earlier this month. Held at the Grand Hyatt on Collins Street, the venue was well suited with many breakout rooms for the numerous sessions.

Adrian Jones and Ben O’Leary shared the stage at the Transform Marketing and Selling Smarter track directly after lunch.  We had the largest number of people attend any of the sessions and we presented Oracle Marketing Cloud in concert with Brainshark.

Brainshark is a video platform that, amongst other things, takes your PowerPoint presentations and turns them into videos which allow you to create a voice over. Used by sales people on their iPads, Brainshark is a brilliant tool for Marketers looking to recycle and get more from their existing content.

For Oracle Marketing Cloud (Eloqua) users, there’s an AppCloud Connector which allows you to load your Brainshark video assets onto a Landing Page just as you would YouTube. 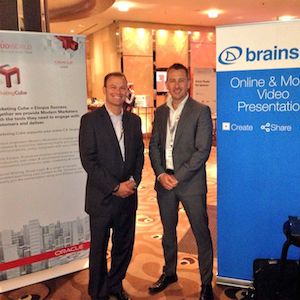 Adrian Jones (Left) and Ben O’Leary (Right) spoke about video and how it can support the selling process. Brainshark and Oracle Marketing Cloud work together to provide marketers with specific and detailed reporting about who has watch a video and for how long. Great digital body language data. By segmenting this data for future campaigns, you really are marketing to the “one”

We were delighted to be a Platinum sponsor at this years Oracle CloudWorld event. We managed to get the largest number of people to any single break out event which shows the great interest amongst business for Marketing Automation. Along with the other various Oracle Cloud Services, the day was filled with loads of information for customers and prospects.

Derek is a Marketing Technologist. He's spent the past 20 years understanding how technology can help organisations engage prospects and customers. With the advent of SaaS technologies, he has helped organisations take advantage of this new delivery model while ensuring their customers are at the centre of all they do. As our Customer Success Director, Derek engages directly with our Eloqua customers to help them get the most out of the platform.